Here Comes the Sun; but it’s not alright.

There can’t have been many people in the UK who actually enjoyed the ferocious heat of the last 48 hours.

Just two days of near 40oC caused suffering in dangerously hot homes, disruptions to transport services, school closures, fires and great pressure on the emergency services. Experts are reported to have calculated that the heatwave might lead to 1000 extra deaths. This is the reality of our warming world; and these last two days of chaos and the disruption are a taste of things to come. We are now too late to stop it, but we can reduce it if we act now.

It is what the IPCC has been saying in its recent reports. According to the latest IPCC report, climate change is making heatwaves more frequent and in the UK they are now 30 times more likely to occur than before the industrial revolution.

If heatwaves become the norm, which is a certainty if we do not limit global warming to 1.5 oC, then we can expect our existing infrastructure in the UK to be pushed to the limits, and to fail. This includes buildings not adapted to heat, railway systems, power, and water supplies; all of which could be regularly disrupted. Emergency services and hospitals may collapse under the pressure. The most vulnerable in our society will suffer, and many will die. There will be more droughts which will lead to food shortages and death of trees and plant life. Catastrophic wildfires will become more common.

We can do something though. It is easy to feel helpless and that someone else has to solve the problem. But the reality is we all can and must play our part.

The solution must go beyond energy and transport. Nearly half of the greenhouse gases emitted in the world come from the food we produce and consume or the goods we buy. As it is us that buys these things, we have the power to change. For example, eliminating food waste would cut around 8% of global greenhouse gases – that is far more than those caused by flying. Making better use of the clothes we buy and gadgets we rely on would also make a big difference. In fact, we published a report last year which showed how making better use of our resources could save tonnes of CO2equivalent between now and 2050.

So, as we reel from the damaging effects from the heatwave, we need to wake up to the reality that resource use is driving climate change and that we will not limit global warming to 1.5 oC if we do not become more resource efficient. This is our main focus at WRAP, as it is for the businesses and countries we work with. Helping people and planet to survive and thrive. 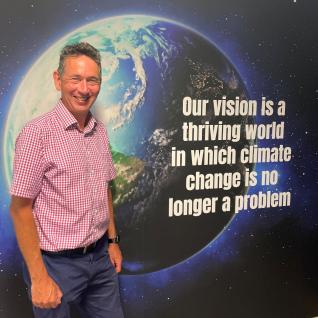