Updated figures for surplus food redistribution via charities and commercial outlets from retail, manufacturing and the hospitality & food service sector for the three year period 2015-2018. 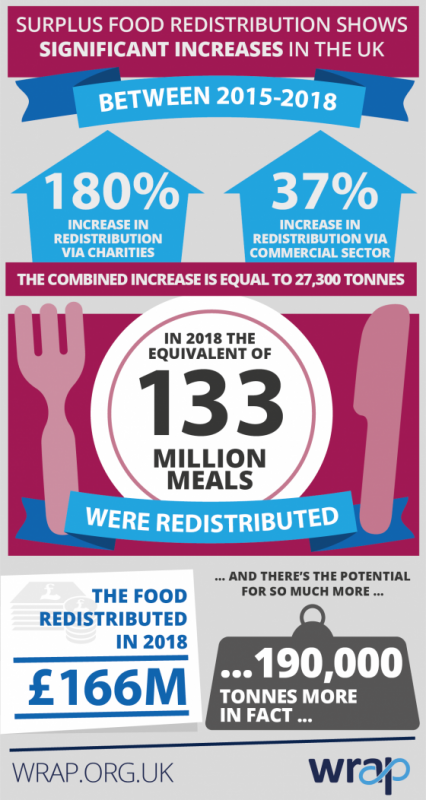 To meet the Courtauld Commitment 2025 (C2025) food waste target and UN Sustainable Development Goal (SDG) 12.3, collaborative and concerted efforts to reduce food  waste are required. These need to focus on preventing food surplus and waste being generated in the first place, redistributing more surplus food that does arise, and diverting more surplus (that cannot be used to feed people) into animal feed.

This new report, Surplus food redistribution in the UK; 2015 to 2018, shows that redistribution has almost doubled since 2015, with an additional £81 million of food surplus being provided, equivalent to an extra 65 million meals a year.

Over the three year period to 2018 there have been increases in the supply of surplus food via both charitable and commercial routes, and from all of the three food business sectors where data is available (retail, manufacture and hospitality & food service). However, compared to 2017 growth in redistribution of surplus food has been driven primarily through the charitable route (a 47% increase), and within that primarily as a result in increased supply from the retail sector (responsible for 63% of the increase).

Even with the impressive increases seen over the last three years, this suggests that there is still potential to redistribute around 190,000 tonnes more from these two sectors. Further potential will exist from other parts of the food supply chain, including from hospitality & food service and farming.